Animals Riding Chairlifts – The Competing Considerations Between the ADA, Safety, And Resort Operations

Animals Riding Chairlifts – The Competing Considerations Between the ADA, Safety, And Resort Operations

GOING BACK DECADES, SKI AREAS HAVE RESTRICTED GUESTS’ ANIMALS ON OPEN CHAIRLIFTS BASED ON A LAUNDRY LIST OF VALID SAFETY CONSIDERATIONS. THESE POLICIES HAVE APPLIED TO PETS OF ALL KINDS, FROM COMFORT OR EMOTIONAL SUPPORT DOGS TO SERVICE ANIMALS THAT PERFORM TASKS FOR THE DISABLED. ARE THE RISKS TO THE SKIING PUBLIC, TO RESORT EMPLOYEES — EVEN TO THE ANIMALS THEMSELVES AND THEIR HANDLERS —TOO GREAT TO ALLOW THEM TO RIDE OPEN CHAIRLIFTS?

The ski industry is now facing its first claim under the Americans with Disabilities Act (ADA) over a ski area’s policy restricting animals, including service dogs, from riding on chairlifts.

In September, a former Iraq War veteran suffering from post-traumatic stress disorder (PTSD) sought to have her labradoodle accompany her on a chairlift ride at Winter Park Resort. Based on safety considerations and the resort’s longstanding policy, Winter Park would not allow her dog on the lift and instead offered to transport the woman and the dog up to a mid-mountain restaurant in a resort vehicle via an access road. She ultimately declined the resort’s accommodation and brought a formal complaint with the Colorado Civil Rights Division against the resort — the first ever such disability claim alleging that under the ADA, ski areas must allow service animals on chairlifts.

There is a tension between expanding access to as many persons with disabilities as possible while at the same time protecting the safety of other guests and employees. While a legal challenge over such a policy at a ski area is likely to spark heated debates, in some ways it’s an important conversation to have both internally at resorts and within the broader ski industry. No matter where you stand on this issue, we can all learn something valuable as we re-examine past approaches to these sensitive issues.

Winter Park is one of the most disability-friendly ski areas in North America. Like most resorts, Winter Park allows service animals in its removable gondola cabins on the Zephyr Express chairlift and in its Village Cabriolet (an open-air gondola), because those do not present the same safety risks as traditional chairlifts. The ski area further allows service animals in its hotel, condos, and employee housing.

Most importantly, since 1970, Winter Park has been the home for the National Sports Center for the Disabled (NSCD), one of the largest therapeutic and adaptive sports agencies in the world, with a staff of 50 employees who serve more than 3,000 people with disabilities to help them experience skiing, snowboarding, kayaking, rock climbing, and other recreational activities. The headquarters for NSCD is located in the Winter Park base area and includes a 2,000-square-foot adaptive equipment laboratory.

While Winter Park has a small number of avalanche rescue dogs that are certified to ride lifts, the resort’s policy restricts avalanche dogs from riding the chairlifts when the ski area is open to the public, absent an emergency. Winter Park is far from alone — nearly every other ski area in the U.S. restricts animals on chairlifts for similar safety reasons, and similar restrictions are also in place at Canadian ski areas as well. In fact, the policy on restricting animals on chairlifts was formally approved by the U.S. Forest Service as part of Winter Park’s winter operating plan. Likewise, ski areas also prohibit any animals (including service and emotional support animals) from accompanying skiers and snowboarders while they are skiing down open trails and runs — again, for safety considerations with other guests.

The Department of Justice (DOJ) has promulgated regulations pertaining to service animals and businesses. Generally, businesses that serve the public must allow service animals to accompany a person with a disability in all areas of the facility where the public is normally allowed to go. The DOJ however, does recognize exceptions to this general rule. One key exception is that a business may impose “legitimate safety requirements” that are necessary for the safe operation of its business, provided that such safety requirements are based on actual risks, not mere speculation, stereotypes, or generalizations about individuals with disabilities.

For example, the DOJ has said that service animals can be restricted at parts of a zoo or parts of a dormitory due to others’ allergies. Moreover, the DOJ has stated that service dogs may be restricted from entering swimming pools or hot tubs, but not from the pool deck around the pool where the public is allowed to go. The DOJ has even said that service animals may be restricted from ambulances because the dog may interfere with emergency staff’s ability to treat patients, stating that “the staff should make other arrangements to have the dog transported to the hospital,” a similar process that ski areas follow when restricting animals from lifts and offering a different mode of transport for a person with a service animal. 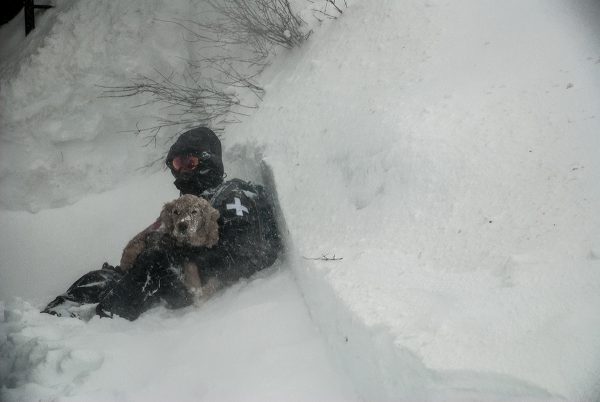 Ski areas have long relied on this “legitimate safety requirement” exception for restricting animals (including service dogs) from riding open chairlifts. The risks are considerable. Animals could fall or jump during the chairlift ride, causing injury to guests or employees below. During the loading or unloading process, animals could injure other guests or employees who are also in the process of loading or unloading a chair or congregating around the loading or unloading area. During a lift evacuation, an animal or dog could injure a patroller attempting to evacuate a disabled person, or injure other guests. Imagine how a dog would react on a long wind-hold on a chairlift, in blowing snow or freezing rain, trapped 100 feet above the ground in an unfamiliar environment — the animal’s anxiety could cause it take any number of unpredictable actions, creating serious safety risks to guests and employees.

While ski areas allow highly trained search-and-rescue dogs and avalanche dogs to ride chairlifts, those animals are specifically trained for chairlift riding, socialization, and obedience. Moreover, they are certified after training by credentialing organizations, including Wasatch Backcountry Rescue in Utah or the Canadian Avalanche Rescue Dog Association.

Given the enormous safety risks, avalanche dogs start their training as early as eight weeks old, almost always as puppies, as part of a chairlift socialization process. They start on stationary chairs, and as their training progresses, they move to open lifts. Obedience is critical: with all manner of wildlife tempting dogs, they are specifically trained and certified to ignore other animals on the ground (rabbits, squirrels, marmots, ermine, etc.). These dogs typically train with one or two specific patrollers to achieve a high level of obedience and comfort with their handler. It takes a minimum of one entire ski season before SAR dogs are truly capable of riding lifts. Special harnesses for each avalanche dog are fitted specifically to the animal, with special belay connections, and cost upwards of $1,000.

Even with all of this intensive training, NSAA found, as part of a survey of ski resorts, that SAR and avalanche dogs still have challenges and incidents riding lifts — jumping, falling, and misloads of all types. Often, ski areas transport avalanche dogs via snowmobile or toboggan to minimize risks to the public.

The ski industry is not alone in adopting such restrictions. Disney, Universal Studios, Six Flags America, and state fairs have formal policies restricting service animals on all manner of rides and attractions, given similar safety concerns on such rides for other guests and park employees. If a particular attraction is “contained,” like an enclosed train ride or a gondola ride above a state fair, service animals are generally allowed. Still, safety professionals in the amusement park industry stress that their attractions, and their restraint systems, are designed for humans, not animals. For chairlifts, the chair seats are intentionally designed for helping people slide on and off a chair, and are slightly tilted to aid in the loading and unloading process, considerations that also increase safety risks for dogs (not to mention whether the chairs even have restraint bars).

In lieu of allowing dogs or service animals on chairlifts, ski areas would likely suggest another form of transport to a location on the mountain as part of the ADA’s requirement to consider reasonable accommodations to people with disabilities. DOJ regulations require businesses to consider “whether reasonable modifications of policies, practices or the provision of aids or services will mitigate the risk” to other guests. This could involve transport of a guest and their service animal on a snowmobile and/or toboggan, or in a resort vehicle up an access road (which is what Winter Park offered in this instance), or other accommodations depending on the circumstances.

All of these concerns require that resorts and their employees approach these complicated issues with the utmost sensitivity and understanding. Most ski areas would strongly discourage a guest from seeking to have service animals accompany them on a lift because of the risk to the animal itself. Legally, this likely cannot be used as a justification for restricting service animals — risks to the animal cannot be the basis for denying access to the animal. However, for many people with disabilities, because they invest thousands of dollars and hundreds of hours training their own service animal, many might not want to put that animal at risk on an unfamiliar chairlift ride high above the snow in winter conditions.

However, there are many things that ski areas can do to be more accommodating. For example, having a defined process for disability accommodations on the resort’s website is critical, as is providing a specific name and contact of someone on staff well-versed in the regulations and complications of dealing with service animals and other unique accommodations. Similarly, this could also include requesting a 72-hour advance notice from a guest who may need a specific accommodation, which the DOJ allows under the ADA. It could even be something as helpful as keeping some dog crates at the base area to accommodate service animals if they are not allowed on ski area chairlifts, as a courtesy to the guest. (This is not required by law, but it would be a much-appreciated courtesy.)

The claim against Winter Park is pending before the Colorado Human Rights Commission and likely will not be decided until the spring of 2018, at the earliest.

(ed note: This is a story that was continuing to develop as we went to press. We invite all opinions on this matter to be submitted to editor@nsp.org.) +